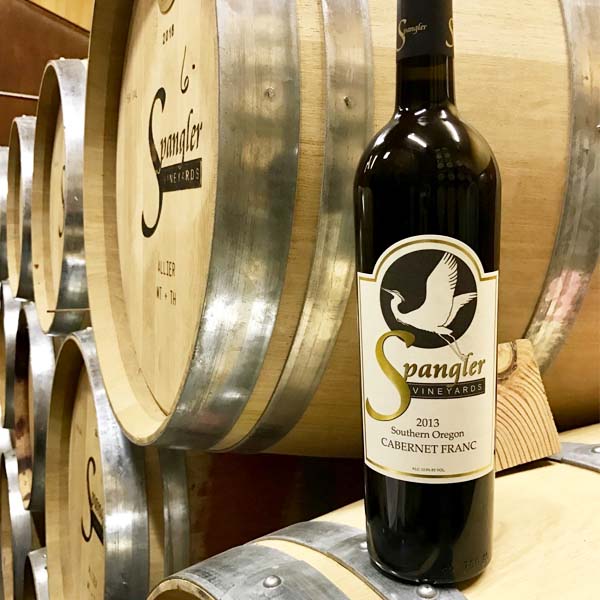 Pat Spangler, a former floor trader on the Chicago Mercantile Exchange, turned a dilapidated Oregon winery into one of the best around, thanks to expert winemaking and attention to detail.

While searching extensively for his dream small family-owned winery, Pat Spangler fell in love with Southern Oregon. The warm weather and multiple microclimates allowed him to pursue his passion for Bordeaux-varietal wines--the location is extremely conducive to growing Cabernet Franc and Cabernet Sauvignon. The beautiful landscape of the Hundred Valleys of the Umpqua is a joy to view each and every day, and the warm, close-knit community convinced Pat that Roseburg would his new home.

Featuring a full variety of wines with a focus on big, bold reds. We craft reserve-quality Bordeaux varietals Cabernet Sauvignon, Cabernet Franc and Merlot, as well as some Rhone favorites such as Syrah, Petite Sirah and Viognier. We also produce a lovely unoaked Chardonnay.

Pat Spangler grew up on an Ohio sheep farm, far from anything resembling a winery.

In 1989, he moved to Chicago to work at the Chicago Mercantile Exchange. He was dating a woman who traveled a lot. One place they traveled together was California wine country, back in its formative days. It was the first time he had tried red wine. Then, by chance, they went to Seattle and visited Chateau Ste. Michelle. This was long before the explosion of wineries in the Woodinville region and was his first opportunity to taste wines from the Pacific Northwest. The experience changed him.

"I never thought I'd do this professionally", Spangler said. "Frankly, it's one of those things that picked me. Never in my wildest dreams did I think I'd ever own a winery or be a professional winemaker. It's something I just love doing."

In 2002, he cleared out his house in Chicago, quit his job and moved to the Sonoma County town of Santa Rosa, looking for an opportunity to buy an existing winery. A few opportunities came up but always fell through, then an Oregon winery called La Garza Cellars came up for sale in the Umpqua Valley city of Roseburg. Spangler bought it in 2004, changing the name to Spangler Vineyards.

When Spangler bought La Garza, it had 3.5 acres of Cabernet Sauvignon, as well as 3 acres of Syrah and 3 acres of Merlot. The vines, planted 1968-1971, are own-rooted and dry-farmed. While the building was a massive fixer-upper, it did come with several stainless steel tanks, 165 barrels of in-progress wine and 3,000 cases of finished wine. From this, he was able to find enough wine that met his standards of quality to release under his new Spangler label. He sold off the rest, giving him enough capital to get him started.

Spangler tends to love Bordeaux and Rhône varieties, even though he's based in a state famous for Pinot Noir ("I'm not a Pinot guy," he says), and he's proved to excel in both, making delicious examples of Syrah and arguably among the best Viognier in the Northwest. He is one of the few wineries in Oregon to make wines from all six red Bordeaux varieties.

Spangler shows his versatility with other interesting varieties, having earned Platinum awards for Petite Sirah (a Rhône variety), Zinfandel (Italian) and Dolcetto (Italian). It's this diversity of wines that makes Spangler's wines more interesting to consumers and has led to 10 career Platinums.

In addition to his estate vineyards, Spangler also sources grapes from Southern Oregon and isn’t afraid to go as far as Milton-Freewater in the Walla Walla Valley to bring in the grapes he craves. His drive to achieve award-winning quality starts with top grapes, paying particular attention to every detail and not being afraid to blend varieties to get the most from every drop he makes. After nearly 30 years of winemaking, Spangler has a good handle on quality, which shows in every glass of Spangler Vineyards wine.

2018 Oregon Winery of the Year